The biggest trip ever – Canberra to QLD: Part 1

This is going to be a big one, so we split it into two parts. There’s a lot of pictures as well.

On the 20 Dec 2017 at around 8am we hopped into the van for our biggest trip yet. And then immediately turned back 2km up the road because we’d forgot our cheap Aldi-brand MaxTrax. But then we were off again, heading up the familiar highway to Sydney. A quick stop in Goulburn for some very tasty pies and then a smooth run onto the Hume Highway, onto the M5 and then the M7/M2. Things were going a little too well of course, so we came to a complete stop in traffic for that stupid stretch of road called the Cumberland Hwy/Pennant Hills Road that currently joins the M2 and Pacific Motorway. Sydney hasn’t yet realised that major freeways, motorways or highways probably shouldn’t have a 6km stretch of traffic lights, poor signage, disappearing left lanes and hill sections. It was 39 degrees Celcius by that time, and the sitting in traffic surrounded by giant semis and Sydney drivers stopped all airflow over the radiator. Fortunately, the engine temps only jumped a few degrees, but the lack of air over the A/C heat exchanger caused it to stop working and blow warm air over us. After about 30 minutes stuck in traffic at this section (and wondering if we would have to do the rest of the trip with no air conditioning), we made it onto the motorway and everything started cooling down again.

It was getting on lunch time on our first day out, so we needed to find a fish and chip shop or similar to stop at. Basing our stop purely on how funny the name of the town is, we stopped at Woy Woy. Little tip: don’t stop at Woy Woy. We had no idea it was such a shithole. But we saw ducks, so I guess things could have been worse.

Continuing north up the highway, Rosie started looking for potential campsites using a caravan/touring book given to us for xmas (thanks Pete and Cath!), with a bit of internet searching to confirm space and to check the online reviews. Rosie was a very good navigator. Originally we’d hoped to get to Port Macquarie on this first day, a distance of 661km. There’s a number of very good campsites in the area, but we weren’t sure of availability during this busy season. We decided to try one just south of Laurieton, in Crowdy Bay National Park. There are three large campsites in the area and we were hoping to get lucky. If not, we’d keep going north to find a campsite or motel further up, depending on how we were feeling.

Well, we found a very good campground that was very empty. Indian Head Campground sits between Diamond Head and Kylies Beach campgrounds, both of which are right on the beaches and set up like caravan parks. Indian Head is a short walk to the beach, and doesn’t require bookings. We found a site we liked, drove 2km back up the road to pay the camping fees ($12 per person plus $14 for vehicle access), drove back and set up camp while kangaroos bounced around completely unafraid of people. Drop toilets were very well maintained and there are two cold water showers that Rosie made use of (hot showers only for me). Only moved the van once a couple meters back once the wind picked up in the afternoon and some branches creaked.

Dinner was pastrami rolls (because stuff cooking after 650kms), and we managed to go for a walk down to Kylie’s Beach just as the sun was setting. Lovely beach, but there was a cold front coming in making it a bit too cold to swim in. 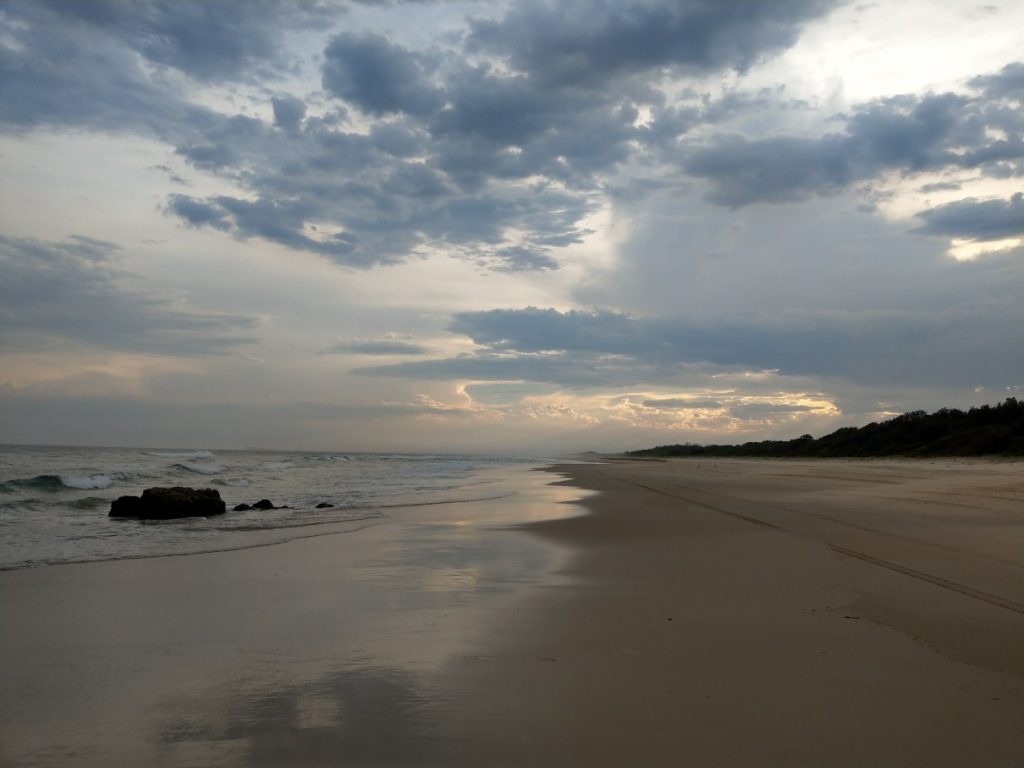 Big change from stuck in traffic in 40+ temps. As we sat around in the dark with myself having a few beers and Rosie drinking softdrink and remembering a christmas party that occurred 3 days prior, we heard a strange grunting noise nearby. Very nearby. After establishing it wasn’t some pervert in the bushes, we looked up found about 3 tawny frogmouth owls trying to impress one disinterested female. These noises went on most of the night. Early night that night in the hopes of waking up early and going for a walk or getting on the road early.

At around 2am in the morning, a big storm came rushing in from the sea. We’d dealt with rain before sleeping in the van; closing the side door and windows, but leaving the rear door open seems to work quite well with not much getting damp. We woke up and listened to the thunder come rolling directly overhead, with the lightning lighting up the entire campground. Very impressive and didn’t last too long either.

Rosie woke up early determined to take a hike onto Indian Head to Mermaid Point and get some photos of the sun rising up over the ocean. She was the first one down the track though that morning and there were some giant spiderwebs across the path with some very large spiders waiting in the middle. She was very brave (I’m told) and didn’t scream or squeal at all when she walked through one or more of these webs. She got to the headland only, making it back in time for breakfast and coffee made with her new Italian ‘Moka’ pot.

We set off up north. To pass the time, I’d brought some movies that we could play via the van’s headunit. Slightly dangerous if you’re driving and watching the movie, but we made sure to only play movies I knew off by heart and didn’t need to see. That and stand up comedy shows really pass the time, particularly on long motorway sections.

We managed to see an almost accident occur between a semi and small car. The car pulls out directy in front of the semi and doesn’t give it any chance to brake. The semi did very well to swerve onto the inside edge of the road and rocket past the stupid woman that was screaming her head off in a productive fashion. We got some footage on the dash cam, will see if we can upload here.

Not much to report on this road, just a bit of rain. I always put the van into 4WD mode when it’s raining; it just feels more secure and planted, particularly around corners. Just before the Queensland border, we got absolutely ripped off on petrol. Previous fillups had been around $1.41 for 91 octane. This motorway petrol station was selling at $1.58. Throughout the trip I usually alternated between two 91 octane fillups then a 95, unless prices were very high. Fuel economy is the same for both fuels, but there’s a noticeable difference in power on 95 when going up hill and overtaking.

Crossing over into QLD tripped us up a bit. We arrived at the border at 3.30pm AEDT determined to look for a campsite almost immediately before all the campground offices closed, but of course QLD doesn’t like daylight savings so our clocks tripped back to 2.30pm AEST, meaning we found an hour somewhere. We just kept on going past the Gold Coast, we’ve both spent far too much time there in the past. An hour later, we just kept going past Brisbane as well. And then before you knew it, we were on the Sunshine Coast a day before we were supposed to be there.

Campgrounds in that area were very hard to find and quite expensive. We rang up a few places, but we were looking at $70 for an unpowered site at a caravan park filled with screaming kids and shared shower facilities. So instead, Rosie popped onto lastminute.com.au and found a very nice hotel with in-room spa, two pools and outdoor spa and washing machine for $115 on Coolum Beach, about a block away from the pub. #vanlife.

The Beach Retreat Coolum is recommended for cheap and cheerful accomodation.

We had a very good night at the pub where we discovered traditional RSA serving of alcohol to intoxicated people laws don’t apply, and then moved back to the hotel room where I drunkenly cut myself opening a beer bottle. Rosie got me bandaids though from the van, so I’m going to keep her. Pretty good second day.

We woke up with a hangover and full day to kill at the Sunshine Coast before meeting friends about 5pm at their place after they finished work. Almost every tourist brochure mentioned going to the Sunshine Coast Ginger Factory, but considering Rosie’s slight allergic and I’m not a huge fan of gingers, we decided to skip that one. Instead, we headed up into the Hinderland to visit one or two wineries.

The first place on the agenda was Flame Hill Vineyard, which has gorgeous views all the way along the coast between Gold Coast and Noosa. Just a word of caution about the road up to the winery: if Google takes you via Razorback road, this is an incredibly steep hill. We passed a poor little hatchback that wasn’t able to make it up. We had a very good tasting at the vineyard which morphed into a very nice snack with a glass of our favourites from the tasting overlooking the vines, with the entire Hinderlands and coast out in the distance. Highly recommended winery. (edit: it’s too hot for most varieties of grapes up there, so they grow only two different types and import the rest from NSW and SA)

The second winery of the day was turned out to be not as good. They were in the process of converting from wine to craft beer, so they just had some bin ends left over. The beer wasn’t that great to my palate either, very bitter with a lot of hops across the entire range.

After that, we headed into Buderim, back near the coast. A friend of ours from Canberra was staying with her sister in a beautiful brand-new house, so we called in for a glass of wine or two. After a delightful afternoon, we called into Little Mountain to meet up with yet more friends and stayed there overnight. They also have a very lovely house, and Rosie got to play with a dog and baby, so she was happy. We may have had a few drinks as the evening progressed.

We woke up and hit the road back to our friend in Buderim, who had just had her boyfriend join her from Canberra. A quick breakfast champagne, some organisation of future meetups, then back on the highway heading north. But not before stopping back to Little Mountain to find the wallet Rosie had left there. But then back on the highway!

About three hours later (Maccas for lunch in Gympie slowed us down), we arrived in Hervey Bay and pulled up outside my parents brand new house in Urangan. Everyone said hi, pressies were put under the tree, the van fridge was brought inside and our daily swim routine was established. The house is very well laid and excellent for entertaining or just lounging around, which is good because we’d already done everything to do in Hervey Bay on previous trips.

Wonderful Christmas, but the picture below sums up how we felt: 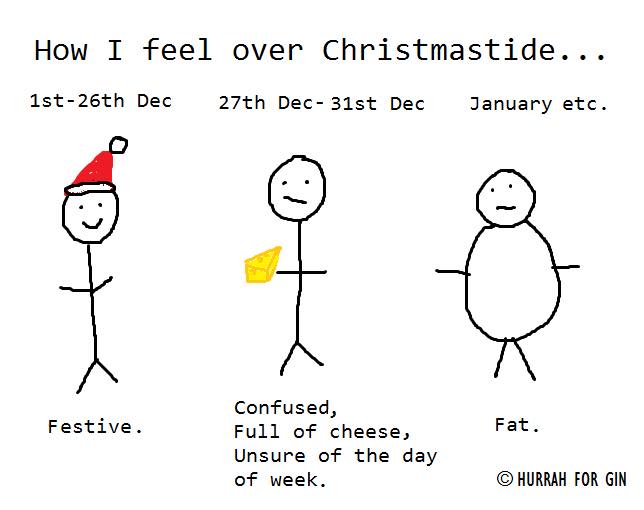