So after a quick 10 days in Vanuatu to escape the Canberra winter and get married, we decided on a quick trip away with the van once we got back. Started out on a not-hungover Thursday morning on 25 May 2017, heading towards Tumut via Brindabella Road. then on through to the Yarrangobilly Thermal Pools in Kosciusko National Park. It started off super foggy, resulting in a couple of ‘eepp!’ moments with some cyclists with no high vis or lights on, but by 11am the sun was out with blue skies! We were pleasantly surprised with the size of Tumut, which was a lot larger than we were expecting.

Given the recent rain, Brindabella road was a little bumpy but still 2WD accessible. You would want to air down regular car tyres a bit though. It was absolutely luxurious compared to Vanuatu roads though. Last winter when we came up here to visit the snow there was a poor little Excel bouncing it’s way up the track. It made it to the snow but left a trail of parts along the way. We didn’t see anyone like that this time. In fact, we didn’t see much of anyone at all after the death-wish cyclists.

The pools themselves are very easy to find and well looked after – $4 entry to the pools themselves, but there’s a bunch of caves in the area as well that we skipped. You’ll find a bunch of signs up that claim the pools are kept at a constant 27 degrees Celsius all year round, but that’s a lie as far as we can tell. The water was bloody cold and it didn’t help that the outside air temperature was only 14 degrees or so. We stayed in only for a few minutes. If you’re planning on going, the walk up and down to the pools is quite long and steep (700m) and made more difficult due to the altitude.

After the pools we headed out to look for a campsite for the night. There’s a lot in the area, so that wasn’t so hard. We’d pre-chosen the Three Mile Dam campsite just because it had good reviews online. The campsite is pretty basic with only a drop toilet, a few picnic tables and some fire pits. You will need to bring in your own wood and kindling as per most national park requirements. Unexpectedly I had mobile reception (Telstra), however as usual Rosie did not (Optus).

It was bloody cold though – the coldest night we’ve ever experienced in the van. Temps dropped to about -3 degrees overnight, but fortunately we were expecting that and had enough cold weather clothing to see us through.

We weren’t expecting the high winds that picked up and made setting up a fire a waste of time. We also discovered that butane doesn’t work well in temps under 10 degrees, but we got a hot meal going eventually. We may have to investigate an LPG stove of some kind, but I’m reluctant to move away from the convenience and size of the small butane stove we’ve currently got.

One thing that stresses Rosie out when camping is food. What to cook, what to pack, snacks so we don’t starve. We always end up bringing far more food that is required for a quick trip, and definitely far more than is required by us, who usually end up close enough to a small town most of the time anyway. This time, we’d had a few options to eat for dinner, but we ended up just heating up some packets of soup and throwing some fried chirizo in there. That, coupled with cheese, pate and crackers, made for a civilised evening meal. And a warm one too, the soup cups were used to warm hands as much as to hold soup.

The insulation on the van windows and a couple of blankets made it quite comfortable sleeping overnight, and we didn’t suffocate despite all the windows and doors fully closed. There was a lot of condensation on the interior glass in the morning though, so I’ll need to look up a solution for that. There wasn’t too much ice on the windows so we had that going for us I guess. We were hoping to wake up to snow in the morning, but unfortunately it just didn’t quite happen. Just a lot of mist over the dam.

We also found that wildlife had gotten into a few things while we were sleeping. Just the trash bag and firelighters though. The culprit was a big crow that was not scared of people at all. He hopped about looking for bacon as we were cooking breakfast, and would have pinched it off the frypan if we’d let him.

Note that holidaying on a tropical island and then camping in the Snowy Mountains immediately after is not recommended.

One of the best things about travelling in the Snowy Mountains at any time of year is the scenery. The routes we took into and out of the park were spectacular – lots of winding mountain passes, snowy gum forests and even a few wild brumbies (horses) grazing on the grasslands. Next time if we get out there earlier we’ll travel down Lobs Hole 4WD trail, which is supposed to be great fun. But that will have to wait until it warms up a little bit. I think we’re done with mountain camping for the next few months – time to see what the coast is like this time of year. 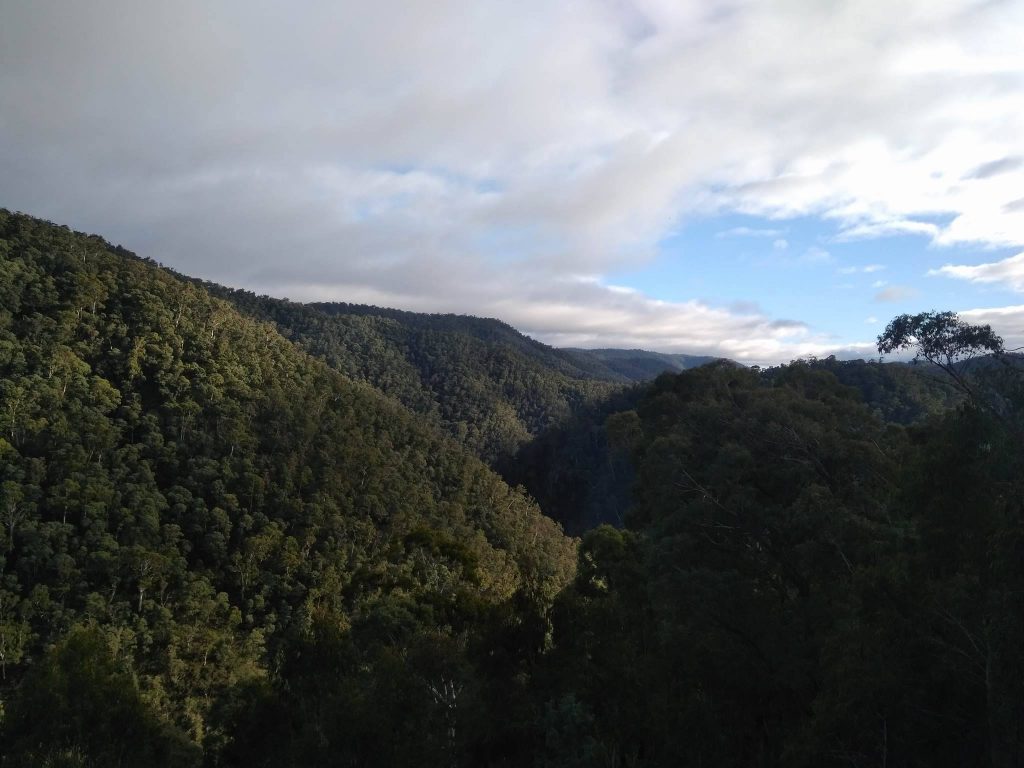