We’re building a camper van. It’s nothing that people haven’t done a hundred times before. We’re going to remove the back seats, build a platform to sleep on, store gear underneath and travel around the country. Or at least travel to some music festivals.

Of course, we’re doing this as comfortably as possible. And because of the Tall Black Van, a 2002 Mitsubishi Delica, we’ll hopefully be doing it with a bit more style and adventure than your standard backpacker Hi-Ace.

I’ll do a proper ‘about the van and mods’ post later on, but for now let me say if you don’t know about Delica’s, it is a real 4wd. It has a low range transfer case, centre locking diff, 2wd/4wd mode select, Pajero/Challenger running gear and reasonable clearance/wading depth. We’ve improved its offroad capabilities with a 40mm suspension lift, 265/75/16 all terrain tyres (31 inch) and a 4mm steel bash plate at the front. It’s not going to do the hardest trails or rock crawling, but it’ll get further than a Forester or RAV-4. And definitely further than a Hi-Ace. We’re hoping that this will let us get to those camping spots further off the beaten path, away from the crowds and further into national parks and state forests.

From Suzuki to Mitsubishi 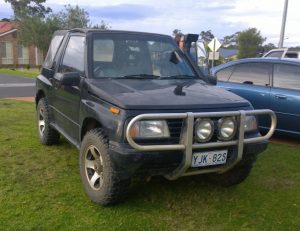 This van replaces the 1989 2-door convertible Suzuki Vitara you see there. I don’t think you can get a different car to the van than that Suzuki. It was a rough, cheap little truck that did everything you asked of it, particularly offroad. But it had a few flaws – because of the soft top, it got broken into a lot. It could only fit two people. It was noisy and bumpy. It didn’t have much power on the highway and wasn’t really suitable for long distance driving. You often ended up tired and sore at the end of a long trip. And of course, you had to make important decisions when camping due to its size, like whether you needed an extra blanket, your own firewood or the full carton of beer (the beer usually won, but still, it was a hard decision to make). The decision to sell this little car was taken from me when it was stolen one Friday night from outside of our apartment building, so I set about looking for the next car. There’s a couple of Delica owners near where we live, and I noticed them. God they were ugly, but the good kind of ugly. Like a pug dog or Sarah Jessica Parker. I did my research, joined up with delicaclub.com (phenomenal resource and very helpful folks), made up my mind and set about trying to find myself a giant offroad van that was never sold new in Australia without actually having driven one.

Eventually I did test drive one (thanks Tim!) and it confirmed that I wanted a van of my own. Which was good, because I’d already paid an import agent to scour the Japanese auctions to try find a good condition van. I didn’t have many conditions, but I did have a few that I wasn’t willing to budge on:

I never really found what I was looking for through the auction broker. It turns out there’s quite a few Australian, Russian and Canadian brokers that snatch up the good vehicles for import to dealers to sell at inflated prices. There’s also the risk of buying a van with a wound back odometer – in particular, there’s a mob in Sydney that have been fined several times for this practice but are still trading under various different names. I found a couple of vans for sale by private owners around Australia, so I sent various mobile mechanics around to check out the cars on my behalf. Most of them were in very poor condition – not maintained, mechanical problems or in one case, the mechanic got it 200m down the road before the gearbox seized. 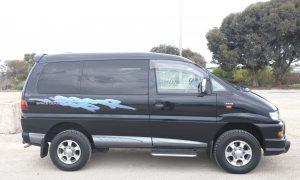 Eventually though, a van was found in Adelaide that fit most of my criteria. I sent a mechanic to inspect, and his report was very promising. He confessed he didn’t like these vans because all he’d seen were ones in bad condition, but this one didn’t seem to have any of the problems he’d seen before. Some quick negotiations with the dealer and I was flying over to see my brand new used van (complete with decals on the side and a chrome front end). This pic is on the drive back to Canberra from Adelaide, where I learnt all about my new car and found out what all the buttons did. First thing to get was cruise control I decided on the way; after 12 hours driving my foot was cramping up from being in the same position for too long.

Living with a Delica

One thing I never really worried about with the Suzuki was overhead height limits. All covered car parks should be the same right? With the van, I now have to check every carpark before entering, including my own. I had done measurements of my garage before buying the car to make sure things would fit, but you never really know until you get the van into the park how it will fit. I didn’t know what I would do if things didn’t fit properly – probably move house.

Most of my friends were skeptical about the purchase. To their credit, after being in the van and visiting various Canberra region wineries or other day trips around town, everyone seems to have come around. Not that it matters – I like it, Rosie tolerates it and that’s the important thing.

This blog will focus on the build of the van from 7 seat wine touring bus to two-person mobile home. I’m not the handiest person in the world, but I’m hoping to have it usable by the end of this year. We’ll see how we go.

Keep track of us through this blog or by our Instagram account @tallblackvan. Or send us an email at contact@tallblackvan.com. Lots more to come.