Everyone has their own ideas of what camping is. For most, it’s chucking a tent and esky in the back of a car, forgetting to take basic things like garbage bags but making do anyway, building a fire and goofing off with friends, then coming back the next day hungover. For others, they like to hike 15km with everything on their back obsessing over lightness, boot brands and water supply gadgets. For us, we upgraded our camping to include the van as a platform, but we like to get away from the crowds which is why the 4wd aspect was so important.

This Easter, we were treated to brand new way of camping by some friends of ours – a powered site at a caravan park in the middle of a town. This changed our standard camping process just a little as we watched glamping at its most fabulous.

Want a shower? Use the relatively clean shower facilities on site. Need to wash dishes? Use the washing up area with hot and cold water. Need to wash clothes? Full laundry facilities available. Run out of fresh water? Tap. Forget something important? Local shops are 600m down the road. Don’t feel like cooking? Pub is 500m down the road. It’s not exactly roughing it, but it’s hard not to appreciate the amenities!

We set off from Canberra on Thursday afternoon, heading down to Glenmack Park in Kangaroo Valley, NSW. We’ve visited there before with some friends and knew it was a great location for kids to play, as well as a central  point for the whole region. We had booked the only remaining powered site at the request of our friends, who were bringing their camper trailer and their two kids (1 x 3 years and 1 x 4 months). We figured that powered sites are big enough for massive caravans – we’d be fine with a campervan and camper trailer. It turns out, as we arrived Thursday afternoon, that having two small kids means a more sheltered approach to camping by enclosing an area roughly the size of Canada. The van got a small space to the side that technically wasn’t all ours, but the next door neighbours were accommodating about it. The van was upgraded with a delightfully colourful fencing system that was designed to ‘slow down, not stop’ the three year old. It mostly succeeded.

Rosie set up the van while I helped with our friends ever growing camper trailer setup. Rosie finished by herself in 9 minutes (chairs, window insulation, fly screens, table, first drink of the day). As for myself, every time I thought we were finished even more gear was brought out and set up. The next day, a previously unattached annex was even added, meaning setup literally took two days to fully do.

It might sound like I’m mocking our friends glorious camping setup, but it all made sense after three nights with them. They have a different idea of what camping is to us, but we made full use of their electrical amenities, as well as the acres of shelter they’d erected. It turns out when you’ve got a camper trailer and a powered site, you get unmetered, unlimited electricity. And with electricity comes lovely things like:

And because the camper trailer is so big, you can fit two bbqs, a 3x3m gazebo, a side tent for the gazebo, additional annexes for the trailer, rugs, tarps and carpet to line the floor and a proper crib setup for the little bub.

First full day on site we decided not to head out and just chill at the park. Beers from 10am, because why not? The caravan park itself is fantastic for kids, and over Easter it was packed. Roaming hoards of small children ran wild across the entire park, centering on the giant inflatable bouncing ‘thing’ at the top of the park. I’ve discovered I’m now at an age where if I make guiding motions for someone backing a caravan, they will follow my instructions. Must be the grey in my hair. After 12 hours of consistent drinking, we were ready for bed. I made it just fine into the van, but apparently going into a heated canvas tent after a long night of bourbon and beer isn’t conducive to a good nights sleep. Rosie, thanks for helping out my mate while I slept!

The next day, we packed up the van and headed off by ourselves to the area to have a poke around the Kangaroo Valley region. We founds some markets, found a winery, bought 12 bottles of wine and generally just enjoyed ourselves in the autumn sunshine.

After three days being the ONLY campervan in the entire park, I’ve decided there’s one reason why these caravan folk stay at places like these. Kids. With kids, you need these ‘luxury’ items to make the trip easier. It’s not like you couldn’t go out bush with the little folk, but if you did you would have to work harder on your holiday, and who wants to do that. The entire thing made sense by the end of the trip.

On the way home on Easter Sunday, we called in at some other friends at Basin View, just south of Nowra. There we found 7 sugared up children bouncing around and falling over repeatedly. We were tempted to stay a night with them, but Rosie had picked up a bug somewhere during the trip and was fading fast, so a quick drive home and back into our own beds.

Overall, we’d like to give a big huge thanks to B and B for coming and staying with us. The kids were really well behaved and gave us drunk people something to watch besides Cars and Shrek. We’d love to go out glamping/camping with you again – just say when and where. 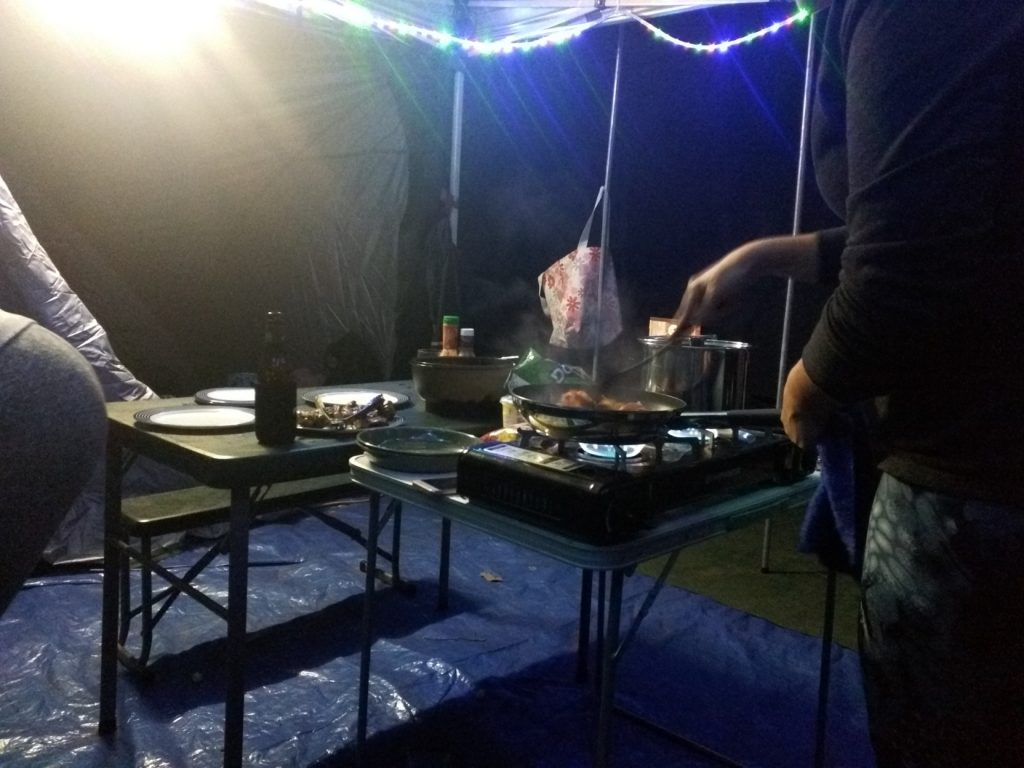