So the second part of the build mostly took place in my second workshop – also known as the carpark underneath my apartment building. I think I’m about 50/50 with other residents at this stage; while I was down there hammering and drilling for almost 3 weeks, I also was available for most of the holiday period to help out anyone in the basement that was having issues. I helped program garage door openers, break into a storage shed, carry large purchases upstairs and offer basic car advice to a bunch of residents while I was down there. I’d like to say it was all altruistic, but the truth is I often just wanted a break from the hot and stuffy van interior.

Right, so first thing you need to do is remove the seats and child tie down points from the van. You end up with something like this. 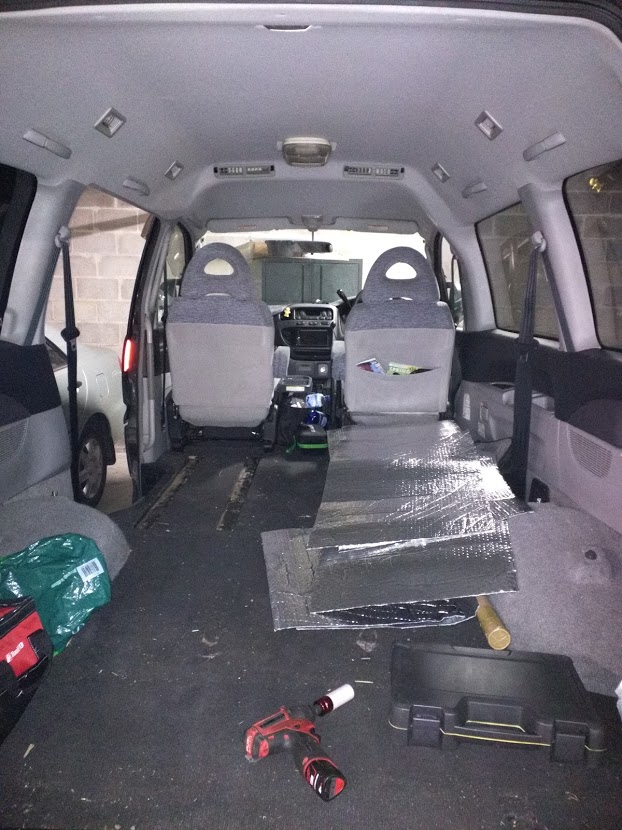 Once that’s done, ask a helpful friend to take down the massive platform and drawer system you’ve created so far. A hand trolley goes a long way here. I just laid the drawers directly on the carpet, but ideally you’d put some thin rubber matting or similar down before resting the drawers on. Make sure you tape up any exposed screw or T-nut heads on the bottom of the platform to stop them from ripping the carpet.

It was at this stage that I remembered I bought new speakers for the van over a year ago and hadn’t installed the rear 6x9s yet. So I did that. It wasn’t too painful and I may do a write up of that process later on as it seems to be a common question asked on the web. Just remember that the mounting depth has to be less that 75mm for the rear speakers and you shouldn’t have any issues.

Removing the seats of a delica is pretty straightforward. The rear seats are each held on with 2 M14 bolts on the wheel well. These are covered with some plastic trim that just unclips off with enough pressure. These seats are awkward, but not too heavy to lug out. The middle captains chairs are a little more tricky to remove. Based on advice from the Delica Club forums, I removed the slides and chairs all as one unit, rather than unbolting the chair from the slide first. There are 6 M14 bolts holding down the slides, two at the rear under little loose flaps of carpet and foam and one at the front underneath the front seats. Once these are out, the only thing stopping you from removing the seats is their weight – each is about 35kg and they are very bulky. Once you’ve got them out, you’re left with 4 2cm deep channels in the floor carpet where the slides used to be. I would recommend filling them with ply if you’ve got some left over, or getting a single rubber floor tile from Bunnings or Clarke’s Rubber to cut to shape. They should just press into place with friction.

The centre platform should slide in between the wheel wells with no issue, but you will be left with gaps on either side of the platform that need to be filled. Fortunately, the original 19mm ply purchase had two 400×1200 sections left over which can be cut to size to fit in these gaps. I used cardboard and a cheap flexible curve ruler off eBay to transfer the necessary shape to the left over bits of ply. You’ll find that only the very rear of the van where it moves from side panels to the rear door really need significant trimming.

Once you’ve got these extra sections of platform, you’ll need a way of mounting them to the existing platform. For this build, being able to remove the camper setup and put the seats back quickly and easily is essential, so I mounted these parts this way. I got some very heavy duty steel L brackets, 2 for each side. These have 3 M10 or M12 bolt holes that I used to mount to the front and back of the platform with some washers and standard nuts. The side sections rest directly on top of these brackets and because of the extra thick ply and heavy-duty bolts and brackets, they don’t move at all. Below is the only real picture I’ve got where you can see one of these brackets. 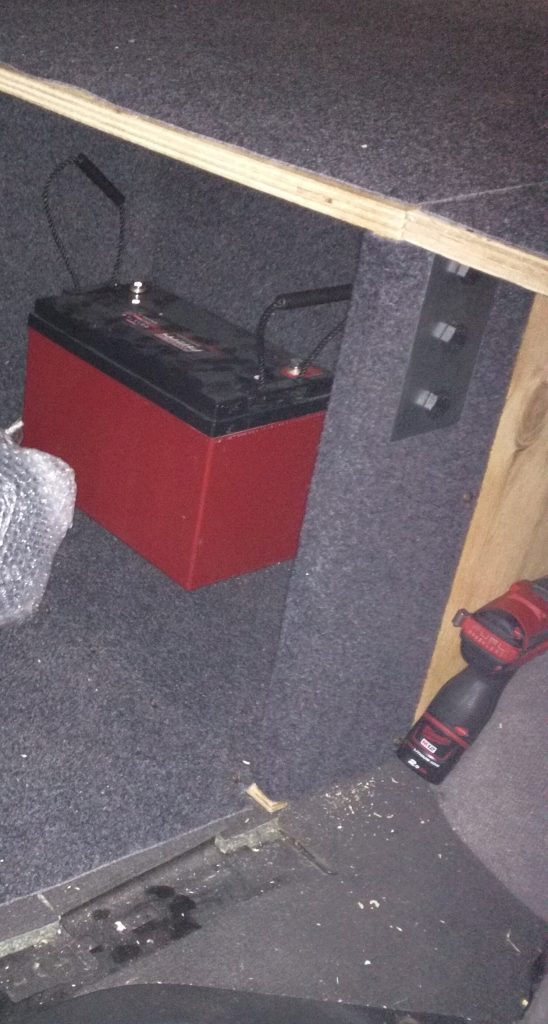 The brackets mean that you just need to remove 12 bolts and the central platform will be able to be slid directly out of the rear doors again. As for the side sections, I used 900mm piano hinges from Bunnings to attach them to the centre platform. This allows you some access to the side pocket areas and also lets you flip them over entirely when removing the centre platform. With the carpet in place, you can’t feel the hinges at all. I’m pretty happy with the results of this little innovation, though the flaps can be hard to lift with the mattress in place. The end result will look something like this. 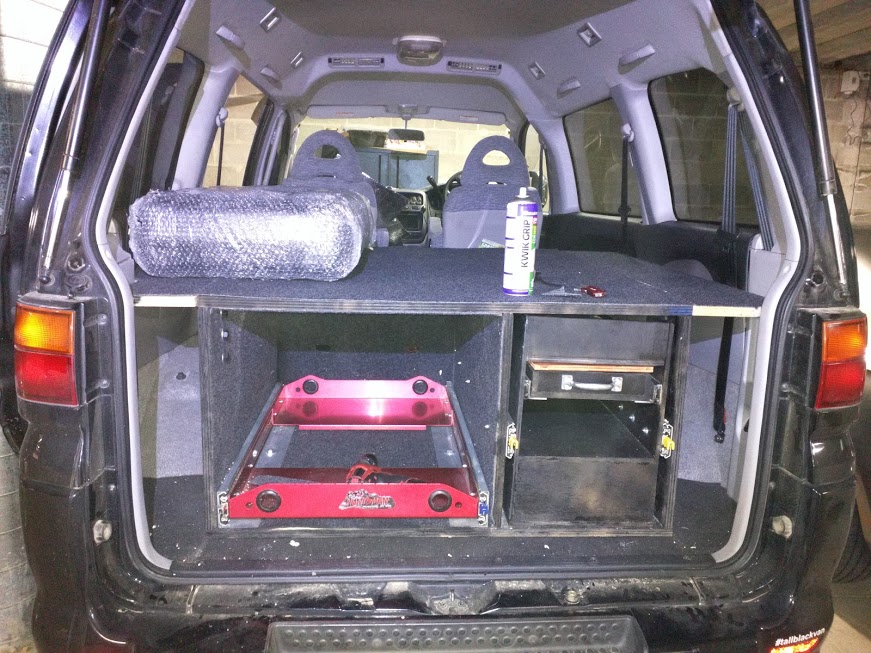 You’ll want to anchor this platform the floor somehow. There’s a few options. You could drill down and find the child restraint holes under the central platform and put some bolts through there. I didn’t go that route though as I would have needed to remove the drawers and make sure there’s clearance for any bolts attached to the platform bottom. You could also attach turnbuckles to the sides of the platform and the rear seat bolts on the wheel wells. This would limit any long items you put in those side pockets however. What I ended up doing was using good ol’ steel L-brackets from the front seat slide mounting holes to the forward section of the platform. You can see them pictured below (40x40x50 3mm brackets in case you were wondering). 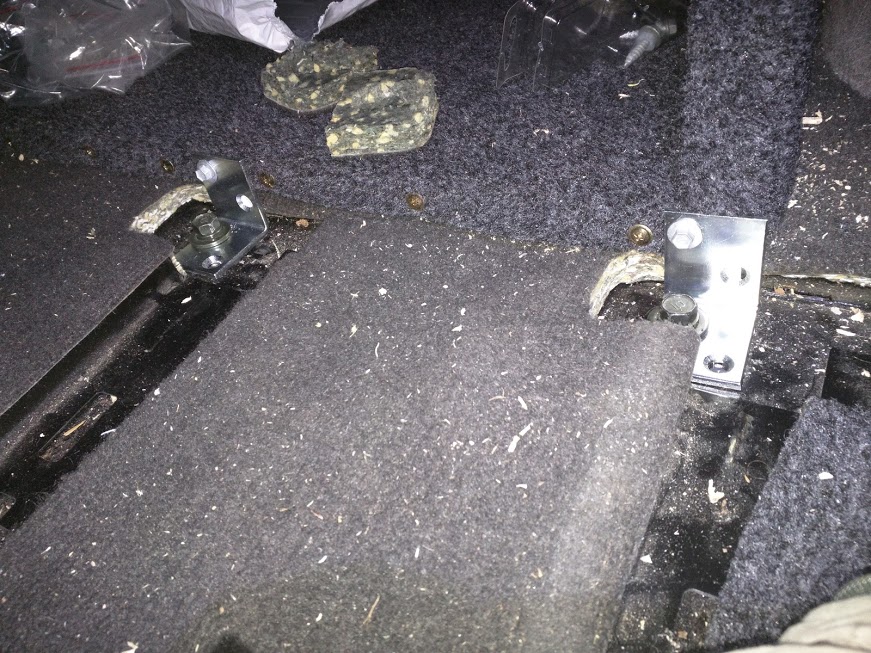 Original seat bolts were used once the bracket was drilled out, and some 50mm 12g roofing screws I had available. The biggest risk is the entire heavy unit sliding forward during a frontal collision and crushing us in the front seats, so the brackets should prevent that from happening.

So at this stage, you’ll have a large rear platform that holds a fridge and a basic kitchen, with a large flat platform about 500mm off the floor of the van. You can still fit in your middle captains chairs at this stage. Down the track, if camping with friends, we might put the middle seats back in, store all the gear on top of the platform and use a tent outside the van. Note this is for a short wheel base Delica – a LWB van will have an extra 400mm to work with.

The next step was to wire up the electrics in the small cubbies left over behind the drawer sections. The 135Ah deep cycle AGM battery fit perfectly in the space behind the drawers, while the other core electrical components can be mounted above the battery or in the cubby behind the fridge slide. Everything is mounted to the rear platform as part of the plan to have the entire camper setup removable as simply as possible. I’ll probably do a post just on the electrics at another time though. 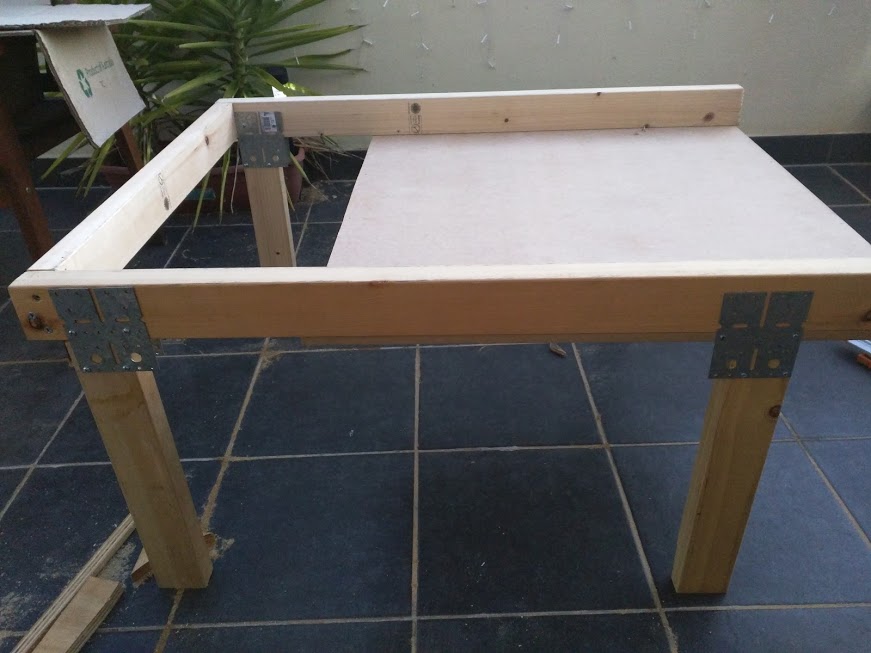 The front/middle section needed to do a couple of things. First, it needed to be lightweight so it can easily be taken in or out so the electrical stuff can be accessed easily if necessary. It had to be reasonably sturdy, as it would hold our upper bodys as we slept. And it needed to be able to store as much as possible underneath it, including a bulky folding solar panel setup. The ‘coffee table’ above is the base of this section. It’s made from 2x4s and some MDF, so its very light. The MDF ‘platform’ portion is designed to hold the 160W solar panel I ordered, with the gap at the end allowing for access directly to the front corner of the van if necessary. The platform had some pretty specific dimensions mostly around the solar panel, but it also had to fit through the front or rear doors easily. I updated it from that picture with some leg braces for additional rigidity, and I ground off the exposed metal parts to stop them catching on things. And painted it black. All up it weighs less than 7kgs and is very easy to get in and out of the van.

I don’t have a photo right now of the piece that sits on top of the ‘coffee table’ section. It’s 9mm MDF with an original size of 800x1400mm, cut to shape to match the sides of the van and the hand holds near the sliding door. This makes the total platform length 2 metres long, more than enough for me. This piece feeds in via the back and just sits on the ‘coffee table’ section, with the mattress weighing it down. I debated hinging it or setting up removable anchor points for it, but so far it just sits where it needs with no issues, even when offroad. Again, everything is designed to be easily removable – I can have the camper taken away and seats put back in in under 30 minutes with this design, provided someone helps with carrying the heavy part!

Now with a full length platform, the mattress can be installed. We used a Malfors double bed foam mattress from Ikea. At 189x139cm, it’s actually smaller than the platform by a few centimetres, but its a standard size for bedding and the extra bits on the side are handy for placing torches/phones/water bottles etc. This is a 12cm thick mattress and so far it is quite comfortable, but we have the option of using a mattress topper if we need some more padding. I’m a big heavy guy and I can sleep on my side without pressure on my hips, so very happy with the mattress purchase. 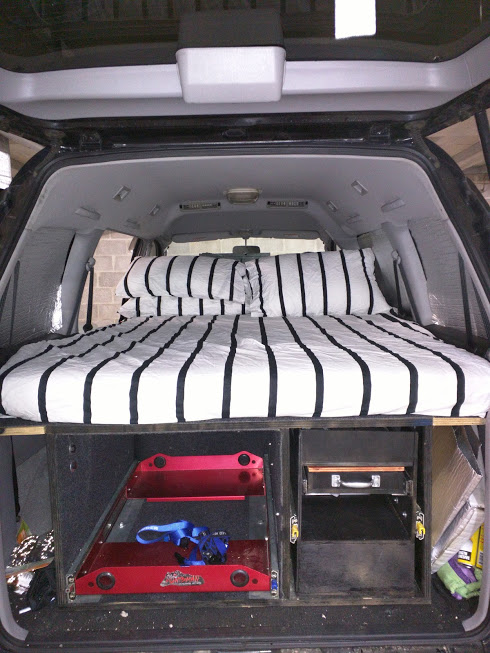 At the time of writing, there’s still a bunch of things to do, particularly after our first night out where we were looking for problems. There’s still some wood visible (more black paint), the cutlery drawer needs a latch because the push to open sliders broke, I need to install the LED strip lighting now we know where they would be best utilised, there’s some rough cuts that could use more sanding etc etc. But all in all, the platform works as a bed, there’s enough room for both of us, the van doesn’t get stuffy with the doors open, there’s plenty of storage, the fridge keeps the beers cold, and the push out stove did not set anything on fire and cooked really well. We’re very happy with how it turned

Oh, and the netting keep the bugs out. I may do a how to on the ‘custom’ mosquito nets I made for each of the doors and windows of the van, but long story short attach magnets to duct tape on edges of mosquito nets. Works really well and you can tuck it under the mattress to get to the fridge and drawers when necessary.